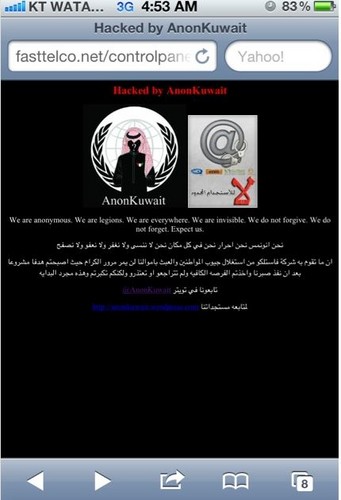 Anonymous claimed responsibility for the defacement of the Fast Telecommunications company website FastTelco, a major ISP (internet service provider) in Kuwait. The Anonymous hacktivists identify themselves as AnonKuwait, and claim to be fighting corporate greed and fraud as well as government corruption and censorship. On their website AnonKuwait claims FastTelco, in collusion with the government "Ministry of Communications and Transport Minister," have broken agreements and been dishonest about pricing, caps on internet speed, and a draconian government download policy. AnonKuwait managed to hack FastTelco's Internet portal, defacing the website with the usual type of Anonymous cyber graffiti, and after a pause of several seconds redirecting the visitor to their twitter page: @AnonKuwait.