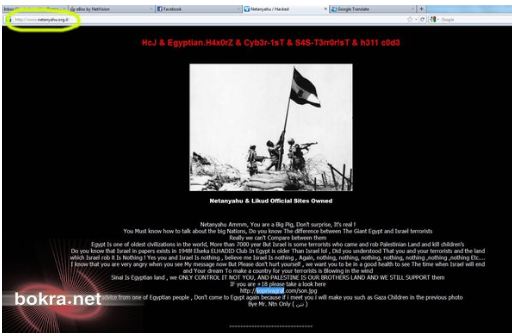 An Egyptian hacker managed on Sunday to hack into the website of Israeli Prime Minister, Benjamin Netanyahu, and placed a picture of Egyptian soldiers raising the Egyptian flag in Sinai during the October, 6, 1973, on the sites' homepage. The hacker who managed to penetrate the webpage of Netanyahu wrote "Anti Zionism"; the site was then gradually taken offline.

The hack is seen as a symbolic message to Netanyahu regarding the ongoing Israeli military escalation, and illegal occupation of Palestine and Arab territory. The hacker also wrote "Egypt is the greatest civilization, established more than 7000 years ago, but the terrorist state of Israel stole the Palestinian lands, and killed children".

The hacker said, "Do you know that Israel was established on paper in 1948! Before Egypt installed its railways, do you know that you, and your state, are nothing, nothing, nothing", and added, "I know you will be angry when you see my message, but please don't hurt yourself, we want you sound and healthy so you can see the end of Israel, to see how your terrorist state disappears".

The hacker placed a picture of a Palestinian child killed in an Israeli air strike targeting Gaza, and wrote "I advise you to stay away from Egypt; because we will make you a picture similar to the child you killed". The website was recovered by went online again to its original state twenty minutes after it was hacked.