Recently discovered attempts of an SSL man-in-the-middle attack against Google users - spotted by a number of Iranian Internet users - have revealed that Dutch Certificate Authority DigiNotar has issued an SSL certificate for all *.google.com domains.

What's worse than discovering that someone has launched a man-in-the-middle attack against Iranian Google users, silently intercepting everything from email to search results and possibly putting Iranian activists in danger? Discovering that this attack has been active for two months. 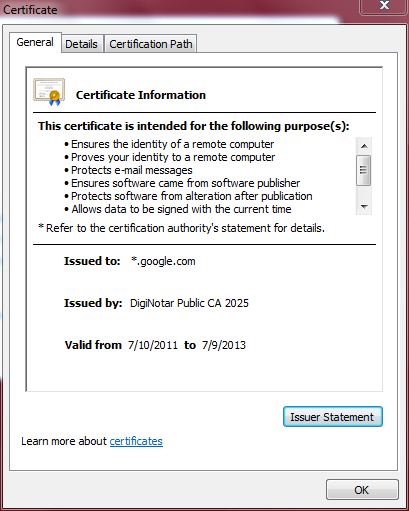 "This is a wildcard for any of the Google domains," said Roel Schouwenberg, senior malware researcher with Kaspersky Lab, in an email interview Monday.
"[Attackers] could poison DNS, present their site with the fake cert and bingo, they have the user's credentials," said Andrew Storms, director of security operations at nCircle Security.


As the problems with the certificate authority system become clear, lots of people are working on ways to detect and mitigate these attacks. Chrome's pinning feature is available not only to Google web sites but to any webmaster; if you run an HTTPS site, you can contact the Chrome developers and get your site's keys hard-coded. Other browser vendors may implement a similar feature soon. The same result could also be achieved by giving web sites themselves a way to tell browsers what certificates to anticipate—and efforts to do this are now underway, building on top of DNSSEC or HSTS. Then browsers could simply not believe conflicting information, or at least provide a meaningful way to report it or warn the user about the situation.
Mozilla has announced the release of new versions of their browser, mail client and Internet suite in which trust of DigiNotar's root certificate will be revoked.