Hackers Get Hacked at #Defcon 19 Conference 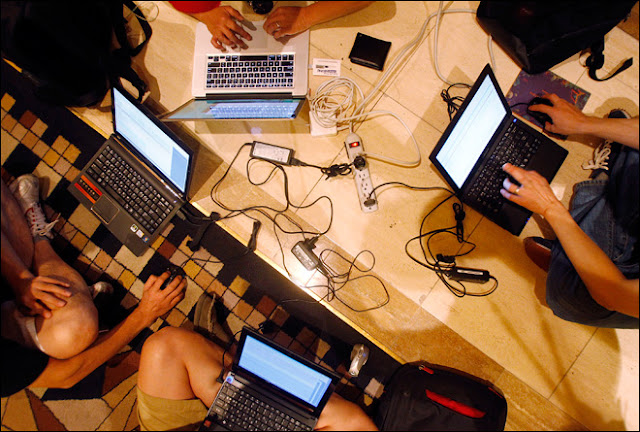 There are so many ways to get hacked at the world's largest hacker conference. A hacker could bump against your pocket with a card reader that steals your credit card information. Or a hacker might eavesdrop on your Internet traffic through an unsecured Wi-Fi network. Or a hacker might compromise your cell phone while you charge it in the hotel's public phone-charging kiosk. More than 10,000 hackers and security experts have descended upon the Rio Hotel and Casino in Las Vegas this weekend for three days of lectures and contests. A hacker with name Coderman claim about such an incident Happens at Rao Hotel

Well by early Saturday morning a weapon was deployed in DefCon. Some characteristics of Hack Attack :
- full active MitM against CDMA and 4G connections from Rio to carriers.
- MitM positioning for remote exploitation to ring0 on Android and PC.
- fall back to userspace only or non-persistent methods when persistent root kit unattainable.
- many attack trees and weaponized exploits. escalation from easy owned up to specialized techniques and tactics until success is achieved.
- simultaneous attack across CDMA and 4G connections using full power in these Licensed bands.
- operated continuously from early Saturday until 8am Monday.
- designed with intent: mass exploitation, reconnaissance, exfiltration, eavesdropping.

Now How you can Judge that, You got Hacked in Defcon 19 Conference at Rao :
- did you accept an upgrade for Android, Java, or other applications?
- did you notice 3G/4G signal anomalies, including full signal yet poor bandwidth or no link?
- did you notice your Android at full charged plugged in, but dropping to <50% charge once unplugged?
- did you notice 4G download speeds at quarter of usual, yet uploads over twice as fast?
- did you notice Android services that immediately respawn when killed? (Voice Search?)
- does your Android no longer connect to USB debugging yet adbd is alive?
- does your PC have an sshd that cannot be kill -9'd?
- did your Android crash - a hard freeze, and then take a long time to reboot?
...many other indicators, but for now that's sufficient to express the point.