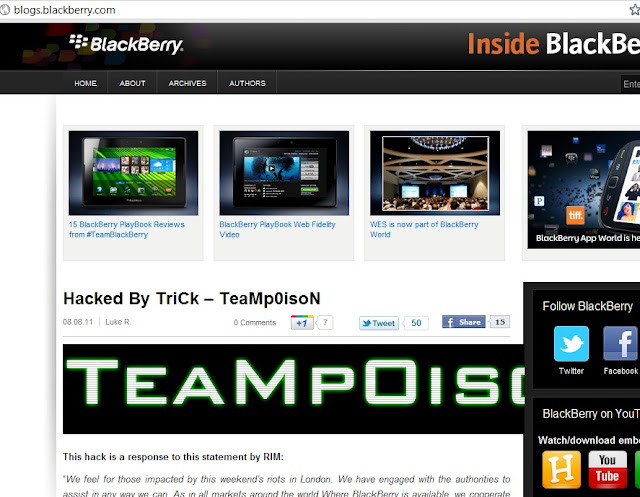 Hacking crew team TriCk – TeaMp0isoN today hack and deface the blog website of BlackBerry against London riots, One of the leading Mobile Company. They post a message also on homepage, as given below . Also There were calls on Tuesday to shut down the BlackBerry Messenger service which is thought to have helped mobilise looters in the riots in London. Mirror of Hack can be seen here. 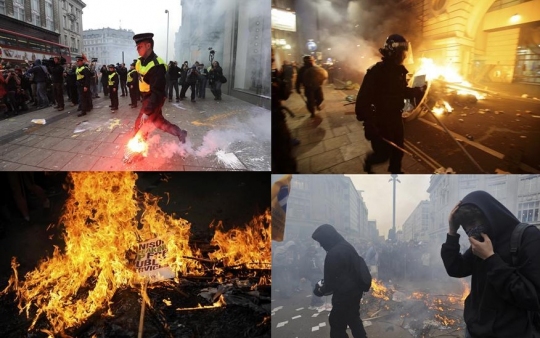 Message posted by TeaMp0isoN on Blog site :
This hack is a response to this statement by RIM:
"We feel for those impacted by this weekend's riots in London. We have engaged with the authorities to assist in any way we can. As in all markets around the world Where BlackBerry is available, we cooperate with local telecommunications operators, law enforcement and regulatory officials. Similar to other technology providers in the UK we comply with The Regulation of Investigatory Powers Act and co-operate fully with the Home Office and UK police forces."
Dear Rim;
You Will _NOT_ assist the UK Police because if u do innocent members of the public who were at the wrong place at the wrong time and owned a blackberry will get charged for no reason at all, the Police are looking to arrest as many people as possible to save themselves from embarrassment…. if you do assist the police by giving them chat logs, gps locations, customer information & access to peoples BlackBerryMessengers you will regret it, we have access to your database which includes your employees information; e.g – Addresses, Names, Phone Numbers etc. – now if u assist the police, we _WILL_ make this information public and pass it onto rioters…. do you really want a bunch of angry youths on your employees doorsteps? Think about it…. and don't think that the police will protect your employees, the police can't protect themselves let alone protect others….. if you make the wrong choice your database will be made public, save yourself the embarrassment and make the right choice. don't be a puppet..
p.s – we do not condone in innocent people being attacked in these riots nor do we condone in small businesses being looted, but we are all for the rioters that are engaging in attacks on the police and government…. and before anyone says "the blackberry employees are innocent" no they are not! They are the ones that would be assisting the police
- TriCk – TeaMp0isoN -
- Greets To: iN^SaNe – Hex00010 – MLT – BlackHacker
- Knowledge is Power . . . . .
Twitter: @TeaMp0isoN_
- TriCk