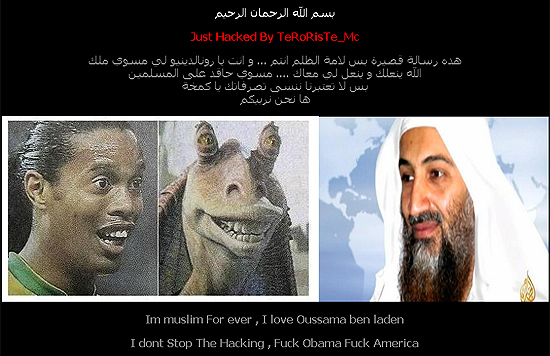 Ronaldinho's website has been hacked by someone appearing to support Osama bin Laden.
GloboEsporte.com reports the hacker posted a photo of bin Laden and statements supporting Islam, as well as comments in Arabic attacking Ronaldinho's "hatred" of Islam.

The site was hacked for a few hours on Saturday, according to the GloboEsporte.com website and other local media.

Ronaldinho could not be contacted for comment. He signed with Flamengo in the beginning of the year, returning to Brazilian football after 10 years in Europe. He helped Flamengo win the Rio de Janeiro state championship, but fans had been jeering him recently because of poor performances that culminated with the team's elimination from the Brazilian Cup on Wednesday.