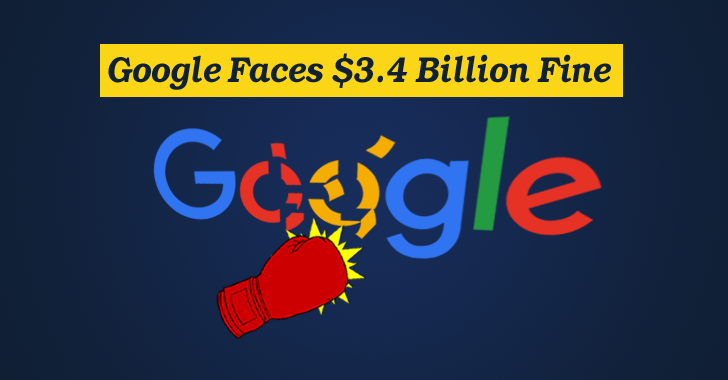 May 16, 2016
Google faces a record anti-trust penalty of about 3 BILLION Euros (US$3.4 Billion) from the European Commission in the coming days, according to reports. After 7-years of the investigation, the European Commission filed anti-trust charges against Google last year for violating antitrust laws. The European Union accused the search engine giant that it had abused its dominance in search by unfairly prioritize and displaying its own comparison shopping service at the top of its search results at the expense of rival products. British newspaper The Sunday Telegraph reports that the European Union is currently preparing a fine of about 3 Billion Euros ($3.4 billion), which is almost triple the amount (1.06 Billion Euro) that Intel was levied several year ago over violating antitrust law. According to the newspaper's sources, the EU officials, led by Margrethe Vestager , are planning to openly announce the fine against Google as early as next month, although the exact figure

Cyber Criminals can make your Diwali unforgettable with Scams

Nov 11, 2012
Cyber criminals become hyper active during festivals. Diwali is no exception. Shantanu Ghosh, Vice-President and Managing Director (India Product Operations) of Internet security solutions company Symantec has observed that malware authors and spammers are using Diwali (The festival of lights that's celebrated across the world (primarily in the Indian sub-continent) as the latest event to lure unsuspecting users into downloading malware, buying products, and falling for scams. Shantanu said cyber criminals attempt to 'poison' web search engine results to take advantage of huge rush in search activity during popular events. " We have observed that cyber attackers are using various techniques to make the most of Diwali, " he warned. Cyber-attackers make use of social engineering tactics to lure users to purchase from or register on unknown websites. Users may be exposing personal information to Internet scammers. " Before giving into the temptation of clicking on a link in
Next Page 