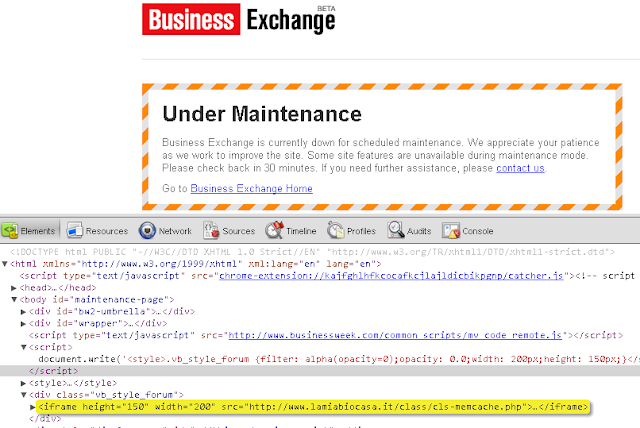 November 02, 2012Mohit Kumar
On a quick tip from a The Hacker News reader - Travis, we came to know about that some antivirus giving warning when readers try to visit  Bloomberg's Businessweek website ( businessweek.com ) that the site is infected with malware and trying to drop a malware on visitor's system. Website having very high alexa rank, that means it server updates to millions of daily visitors. Most obvious that Bloomberg's site was hacked and then hacker was able to inject the script to infect visitors of site. After exploring the site, I found that some " Under Maintenance " pages like (  hxxp://bx.businessweek.com/photos/spham708_medium.jpg  ) of  Businessweek website having injected iframe that trying to open a remote page uploaded on a italian website as shown below: Injected URL :  hxxp://www.lamiabiocasa.it/class/cls-memcache.php ( Do not open this page ). We have another news from other sources that, recently around hundreds of italian websites was got hacked silently
Next Page 