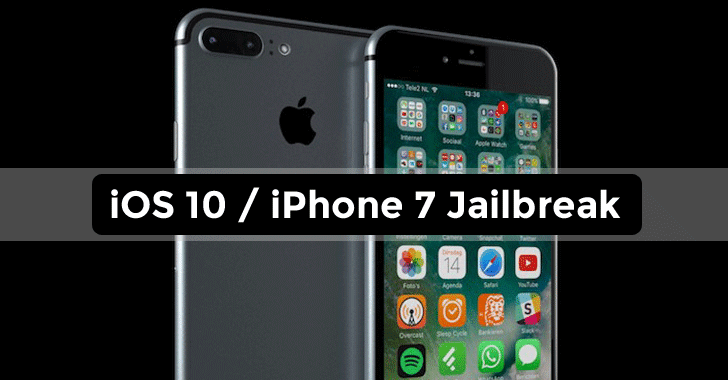 September 22, 2016Swati Khandelwal
It has only been a few days since the launch of Apple's brand new iPhone 7 and iPhone 7 Plus, but it appears that the new iPhone has already been jailbroken. That didn't take long. Right? Security researcher and well-known hacker Luca Tedesco shared an image of his jailbroken smartphone on his Twitter account to show off the world that the new iPhone 7 has been jailbroken. The image posted by Tedesco on Wednesday clearly shows an iPhone 7 running both iOS 10.0.1 as well as the Cydia app store, which allows jailbreakers to install apps and other software that Apple does not officially support. Unfortunately, Tedesco has not publically released the exploit, nor he has provided much information about it. So, right now, it is hard to say if and when he will release the iPhone 7 jailbreak to the public. It is also not clear whether the exploit is an untethered jailbreak. The untethered jailbreak is a jailbreak where your device doesn't require any reboot every ti
Next Page 
Popular This Week
New BHUNT Password Stealer Malware Targeting Cryptocurrency Wallets
Hackers Planted Secret Backdoor in Dozens of WordPress Plugins and Themes
Chrome Limits Websites' Direct Access to Private Networks for Security Reasons
Chinese Hackers Spotted Using New UEFI Firmware Implant in Targeted Attacks
Don't Use Public Wi-Fi Without DNS Filtering
Hackers Attempt to Exploit New SolarWinds Serv-U Bug in Log4Shell Attacks
Online Courses and Software