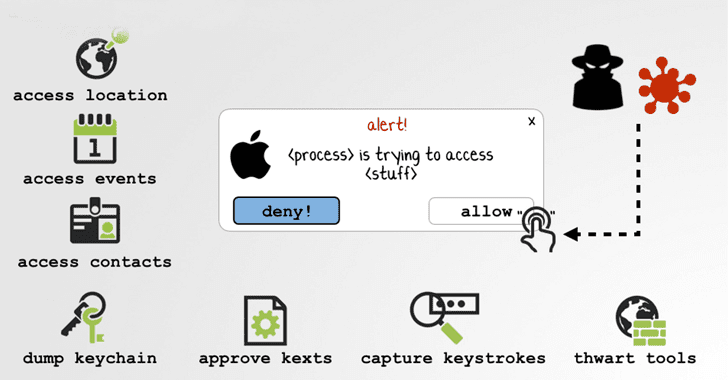 August 13, 2018Mohit Kumar
Your Mac computer running the Apple's latest High Sierra operating system can be hacked by tweaking just two lines of code, a researcher demonstrated at the Def Con security conference on Sunday. Patrick Wardle, an ex-NSA hacker and now Chief Research Officer of Digita Security, uncovered a critical zero-day vulnerability in the macOS operating system that could allow a malicious application installed in the targeted system to virtually "click" objects without any user interaction or consent. To know, how dangerous it can go, Wardle explains : "Via a single click, countless security mechanisms may be completely bypassed. Run untrusted app? Click...allowed. Authorize keychain access? Click...allowed. Load 3rd-party kernel extension? Click...allowed. Authorize outgoing network connection? click ...allowed." Wardle described his research into "synthetic" interactions with a user interface (UI) as "The Mouse is Mightier than the Sword," 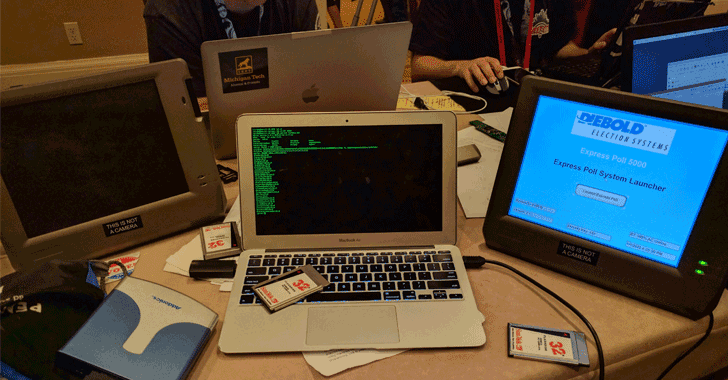 July 31, 2017Mohit Kumar
Image Credit: @tjhorner Today, election hacking is not just about hacking voting machines, rather it now also includes hacking and leaking dirty secrets of the targeted political parties—and there won't be a perfect example than the last year's US presidential election . But, in countries like America, even hacking electronic voting machines is possible—that too, in a matter of minutes. Several hackers reportedly managed to hack into multiple United States voting machines in a relatively short period—in some cases within minutes, and in other within a few hours—at Def Con cybersecurity conference held in Las Vegas this week. Citing the concern of people with the integrity and security of American elections , for the first time, Def Con hosted a " Voting Machine Village " event, where tech-savvy attendees tried to hack some systems and help catch vulnerabilities. Voting Machine Village provided 30 different pieces of voting equipment used in American election 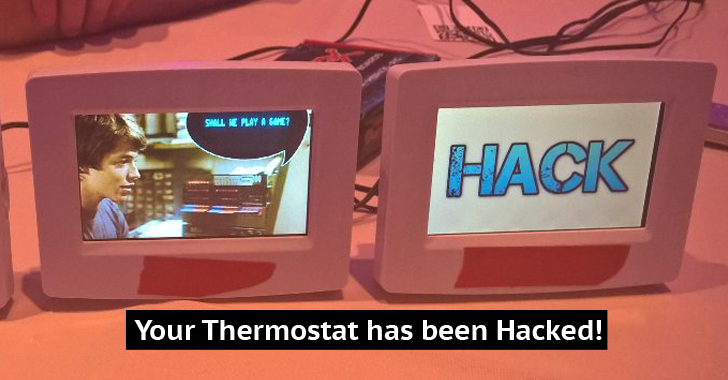 First-Ever Ransomware For Smart Thermostat is Here — It's Hot!

August 08, 2016Swati Khandelwal
Internet of Things (IoT) is the latest buzz in the world of technology, but they are much easier to hack than you think. Until now we have heard many scary stories of hacking IoT devices , but how realistic is the threat? Just think of a scenario where you enter in your house, and it's sweltering, but when you head on to check the temperature of your thermostat, you find out that it has been locked to 99 degrees. And guess what? Your room thermostat is demanding $300 in Bitcoins to regain its control. Congratulations, Your Thermostat has been Hacked! This is not just a hypothetical scenario; this is exactly what Ken Munro and Andrew Tierney of UK-based security firm Pen Test Partners have demonstrated at the DEFCON 24 security conference in Las Vegas last Saturday. Two white hat hackers recently showed off the first proof-of-concept (PoC) ransomware that infects a smart thermostat. Ransomware is an infamous piece of malware that has been known for locking up comput 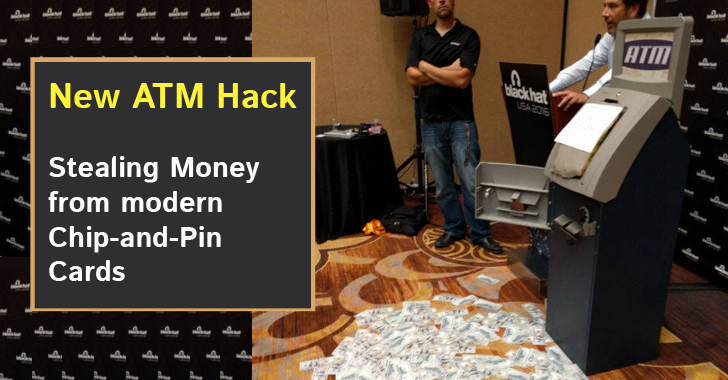 August 05, 2016Swati Khandelwal
Forget about security! It turns out that the Chip-and-PIN cards are just as easy to clone as magnetic stripe cards. It took researchers just a simple chip and pin hack to withdraw up to $50,000 in cash from an ATM in America in under 15 minutes. We have been told that EMV ( Europay, MasterCard and Visa ) chip-equipped cards provides an extra layer of security which makes these cards more secure and harder to clone than the old magnetic stripe cards. But, it turns out to be just a myth. A team of security engineers from Rapid7 at Black Hat USA 2016 conference in Las Vegas demonstrated how a small and simple modifications to equipment would be enough for attackers to bypass the Chip-and-PIN protections and enable unauthorized transactions. The demonstration was part of their presentation titled, "Hacking Next-Gen ATMs: From Capture to Washout," [ PDF ]. The team of researchers was able to show the audience an ATM spitting out hundreds of dollars in cash. Here 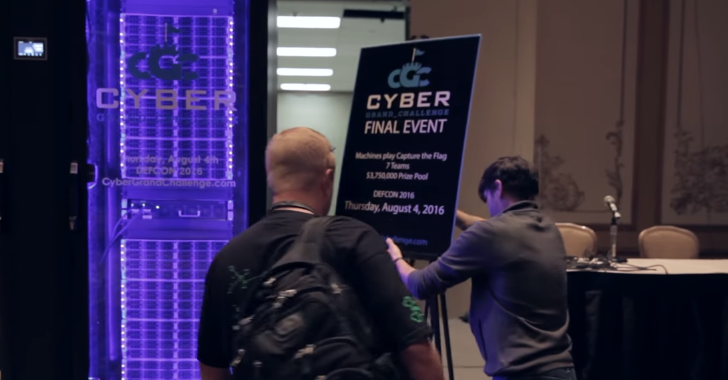 July 14, 2016Mohit Kumar
Why we can't detect all security loopholes and patch them before hackers exploit them? Because... we know that humans are too slow at finding and fixing security bugs, which is why vulnerabilities like Heartbleed , POODLE and GHOST remained undetected for decades and rendered almost half of the Internet vulnerable to theft by the time patches were rolled out. Now to solve this hurdle, DARPA has come up with an idea: To build a smart Artificial Intelligence System that will automatically detect and even patch security flaws in a system. Isn't it a revolutionary idea for Internet Security? The Defense Advanced Research Projects Agency (DARPA) has selected seven teams of finalists who will face off in a historic battle, as each tries to defend themselves and find out flaws without any human control. The DARPA Cyber Grand Challenge will be held at the annual DEF CON hacking conference in Las Vegas next month. Must Read : Artificial Intelligence System that can detec
Next Page 
Popular This Week
12-Year-Old Polkit Flaw Lets Unprivileged Linux Users Gain Root Access
New BHUNT Password Stealer Malware Targeting Cryptocurrency Wallets
Hackers Planted Secret Backdoor in Dozens of WordPress Plugins and Themes
Google Drops FLoC and Introduces Topics API to Replace Tracking Cookies for Ads
Emotet Now Using Unconventional IP Address Formats to Evade Detection
Chinese Hackers Spotted Using New UEFI Firmware Implant in Targeted Attacks