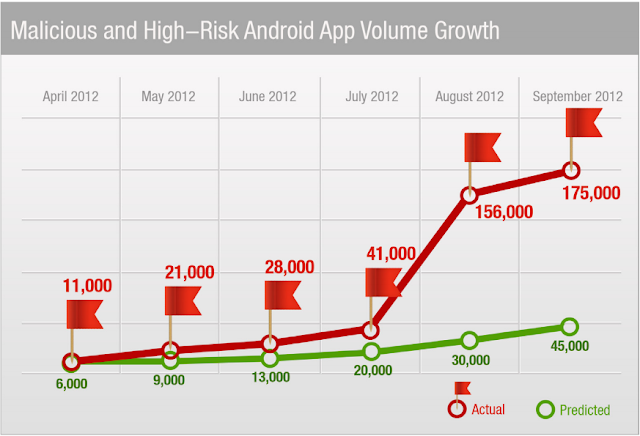 Sharp rise in Android Malwares in Third Quarter of 2012

October 23, 2012Mohit Kumar
Mobile industry watchers have long known that Android is under attack. The number of high risk and dangerous apps targeting Android users jumped from 30,000 in June to 175,000 in September, Trend Micro said in its third quarter security roundup . While some apps are clearly criminal - such as those that secretly purchase premium smartphone services - others are more of a privacy threat. These include "Aggressive Adware" apps that collect more personal information than the user has authorized. App developers may even be aware of the problem, thanks to the existence of rogue ad networks. " Though most adware is designed to collect user information, a fine line exists between collecting data for simple advertising use and violating one's privacy," Trend Micro said. "Because adware normally collect user information for legitimate purposes, they can serve as an effective means to gather more data than some would want to give out. " Many of these issues a
Next Page 
Popular This Week
Update Google Chrome to Patch 2 New Zero-Day Flaws Under Attack
Critical Flaws Discovered in Azure App That Microsoft Secretly Installs on Linux VMs
Microsoft Releases Patch for Actively Exploited Windows Zero-Day Vulnerability
Apple Issues Urgent Updates to Fix New Zero-Day Linked to Pegasus Spyware
Malware Attack on Aviation Sector Uncovered After Going Unnoticed for 2 Years
You Can Now Sign-in to Your Microsoft Accounts Without a Password