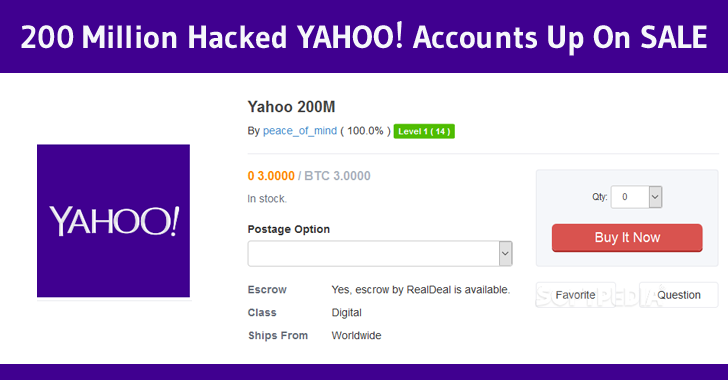 August 02, 2016Swati Khandelwal
Hardly a day goes without headlines about any significant data breach. In the past few months, over 1 Billion account credentials from popular social network sites, including LinkedIn , Tumblr , MySpace and VK.com were exposed on the Internet. Now, the same hacker who was responsible for selling data dumps for LinkedIn, MySpace, Tumblr and VK.com is now selling what is said to be the login information of 200 Million Yahoo! users on the Dark Web . 200 Million Yahoo! Logins for 3 BTC The hacker, who goes by the pseudonym " Peace " or "peace_of_mind," has uploaded 200 Million Yahoo! credentials up for sale on an underground marketplace called The Real Deal for 3 Bitcoins (US$1,824). Yahoo! admitted the company was "aware" of the potential leak, but did not confirm the authenticity of the data. The leaked database includes usernames, MD5-hashed passwords and date of births from 200 Million Yahoo! Users. In some cases, there is also the backup e

May 18, 2013Wang Wei
22 million Yahoo! Japan's user IDs may have been stolen during an unauthorised attempt to access the administrative system of its Japan portal. " We don't know if the file of 22 million user IDs was leaked or not, but we can't deny the possibility given the volume of traffic between our server and external terminals ", Yahoo said. The information did not include passwords and the kind of data necessary to verify a user's identity or reset passwords, it said, adding that the company had updated its security measures to prevent a repeat of the incident. In 2011, Sony said information such as usernames, passwords and birth dates of more than 100 million people may have been compromised after hackers struck the PlayStation Network and Sony Online Entertainment services. Japan acknowledges that its preventative measures against cyberattacks remain underdeveloped, with the national police agency having announced this month it would launch a team to analyze and combat cyberatt
Next Page 
Popular This Week
Bug in Popular WinRAR Software Could Let Attackers Hack Your Computer
Windows 10, Linux, iOS, Chrome and Many Others at Hacked Tianfu Cup 2021
Malicious NPM Packages Caught Running Cryptominer On Windows, Linux, macOS Devices
Hackers Set Up Fake Company to Get IT Experts to Launch Ransomware Attacks
REvil Ransomware Gang Goes Underground After Tor Sites Were Compromised
Popular NPM Package Hijacked to Publish Crypto-mining Malware