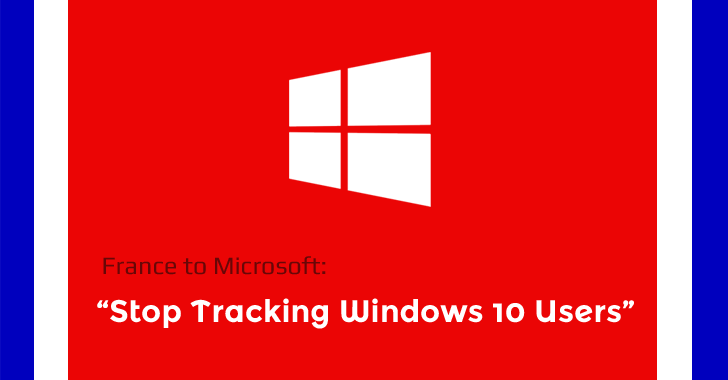 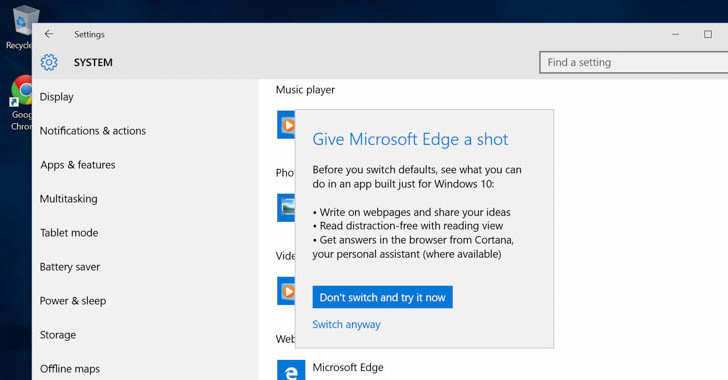 October 19, 2015Swati Khandelwal
Microsoft wants Windows 10 users to use its Edge browser , and the company is pulling every trick out to make it happen. In a newly leaked Windows 10 preview release ( build 10568 ) , Microsoft has added a new prompt that appears whenever you try to switch away from default apps, including Microsoft Edge . Considering the wide adoption of Microsoft's newest operating system Windows 10, it seems that users are still hesitant in adopting Edge browser that comes bundled with  Windows 10 . To help encourage a higher adoption of Microsoft's default apps bundled with Windows 10, the software giant seems to be taking some steps. Come, Give Microsoft Edge A Shot!  If you already have Microsoft Edge as your default browser, then installing another rival browser, such as Google Chrome or Mozilla Firefox , and switching the defaults will make a dialog box with " Give Microsoft Edge a shot " appear. The prompt highlights some of the latest features in 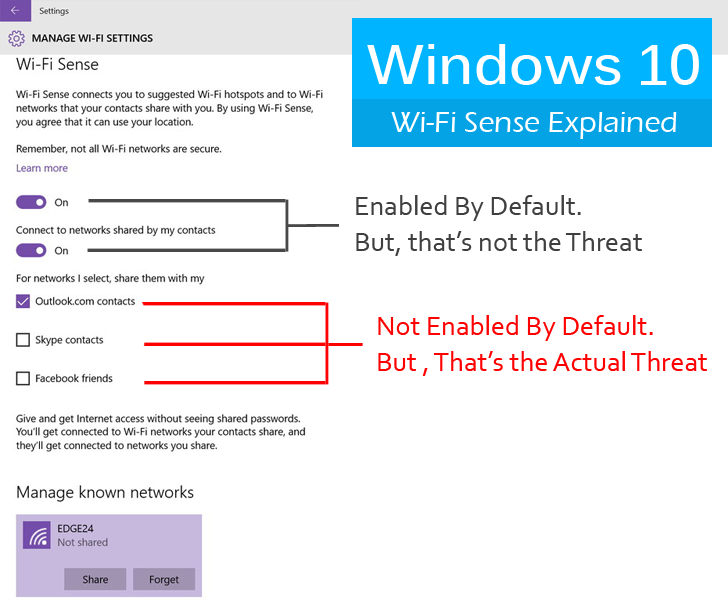 July 31, 2015Swati Khandelwal
Just one day after Microsoft released its new operating system, over 14 Million Windows users  upgraded their PCs to Windows 10 . Of course, if you are one of the Millions, you should aware of Windows 10's Wi-Fi Sense feature that lets your friends automatically connects to your wireless network without providing the Wi-Fi password. Smells like a horrible Security Risk! It even triggered a firestorm among some security experts, who warned that Wi-Fi Sense is a terrible and dangerous feature and that you should disable it right away. Even some researchers advised Windows 10 users to rename their Wi-Fi access points. Before discussing the risks of Wi-Fi Sense, let's first know how it works. Also Read:  How to Fix 35+ Windows 10 Privacy Issues With Just One Click . How Windows 10 Wi-Fi Sense works? Windows 10 Wi-Fi Sense feature allows you to share your Wi-Fi password with your friends or contacts, as well as lets you automatically connect to networ
Next Page 