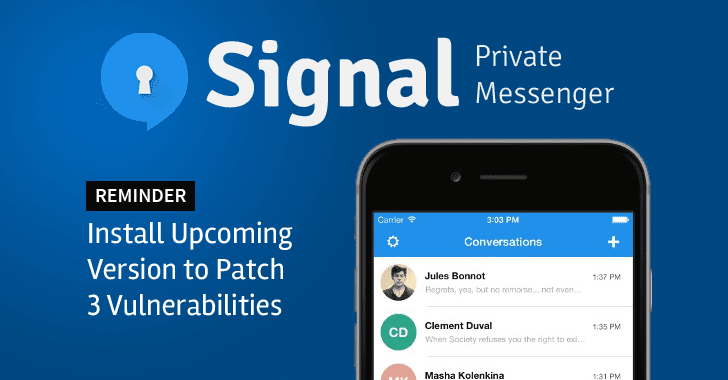 September 16, 2016Mohit Kumar
Two Researchers have discovered a couple of vulnerabilities in Signal , the popular end-to-end encrypted messaging app recommended by whistleblower Edward Snowden. One of those vulnerabilities could allow potential attackers to add random data to the attachments of encrypted messages sent by Android users, while another bug could allow hackers to remotely crash vulnerable devices. The vulnerabilities have just been patched, but the updated version of Signal is yet available on the Github open source repository, and not on the Google's official Play Store for Android apps, leaving millions of privacy conscious people vulnerable to attacks. That means, if you have installed Signal messaging app via Google Play Store, like other millions of Android users, you are still vulnerable to hackers. Developed by open source software group Open Whisper System, Signal is a free and open source messaging application specifically designed for Android and iOS users to make secure and e
Next Page 
Deals — IT Courses and Software