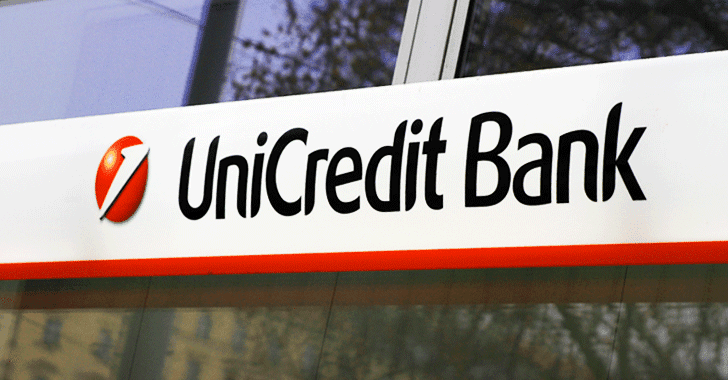 October 28, 2019Mohit Kumar
UniCredit, an Italian global banking and financial services company, announced today that it suffered a security incident that leaked some personal information belonging to at least 3 million of its domestic customers. Officially founded in 1870, UniCredit is Italy's biggest banking and financial services and one of the leading European commercial banks with more than 8,500 branches across 17 countries. What happened? — Though UniCredit did not disclose any details on how the data incident happened, the bank did confirm that an unknown attacker has compromised a file created in 2015 containing three million records relating only to its Italian customers. What type of information was compromised? — The leaked data contains personal information of 3 million customers, including their: Names Cities Telephone numbers Email addresses What type of information was not compromised? — Unicredit confirmed that the compromised user records did not include any other perso

July 19, 2013Wang Wei
A cookie is a piece of data that is issued by a server in an HTTP response and stored for future use by the HTTP client. Quite simply, a cookie is a small text file that is stored by a browser on the user's machine. Cookies are plain text; they contain no executable code. The client then re-supplies the cookie value in subsequent requests to the same server. This mechanism allows the server to store user preferences and identity individual users. One of the biggest issues in cookie mechanism is how to handle them. In short, the server had no way of knowing if two requests came from the same browser, called Cookie Handling vulnerability. ' Piero Tedeschi ' reported a similar issue in ' Telecom Italia ' ( https://www.telecomitalia.it/ ), the largest Italian telecommunications company, also active in the media and manufacturing industries. This vulnerability allow a malicious user to hijack multiples accounts, just by exporting and importing the cookies from
Next Page 
Popular This Week
Apple Issues Urgent Patches for 2 Zero-Day Flaws Exploited in the Wild
Instagram‌ ‌Bug Allowed Anyone to View Private Accounts Without Following Them
Chinese Hackers Believed to be Behind Second Cyberattack on Air India
Update‌ ‌Your Chrome Browser to Patch Yet Another 0-Day Exploit‌ed ‌in‌-the‌-Wild
Researchers Uncover 'Process Ghosting' — A New Malware Evasion Technique
Ukraine Police Arrest Cyber Criminals Behind Clop Ransomware Attacks
Cybersecurity Executive Order 2021: What It Means for Cloud and SaaS Security