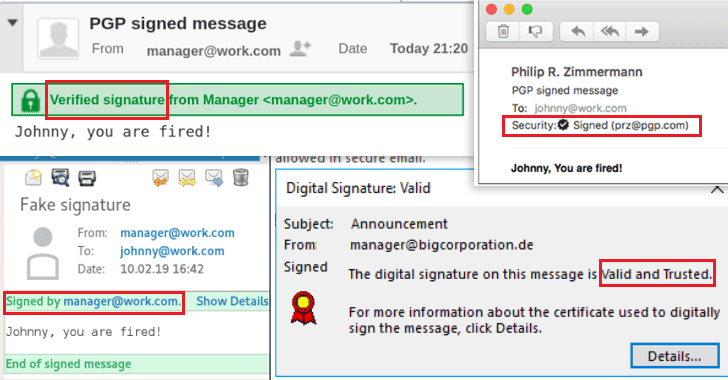 April 30, 2019Swati Khandelwal
A team of security researchers has discovered several vulnerabilities in various implementations of OpenPGP and S/MIME email signature verification that could allow attackers to spoof signatures on over a dozen of popular email clients. The affected email clients include Thunderbird, Microsoft Outlook, Apple Mail with GPGTools, iOS Mail, GpgOL, KMail, Evolution, MailMate, Airmail, K-9 Mail, Roundcube and Mailpile. When you send a digitally signed email, it offers end-to-end authenticity and integrity of messages, ensuring recipients that the email has actually come from you. However, researchers tested 25 widely-used email clients for Windows, Linux, macOS, iOS, Android and Web and found that at least 14 of them were vulnerable to multiple types of practical attacks under five below-mentioned categories, making spoofed signatures indistinguishable from a valid one even by an attentive user. The research was conducted by a team of researchers from Ruhr University Bochum and 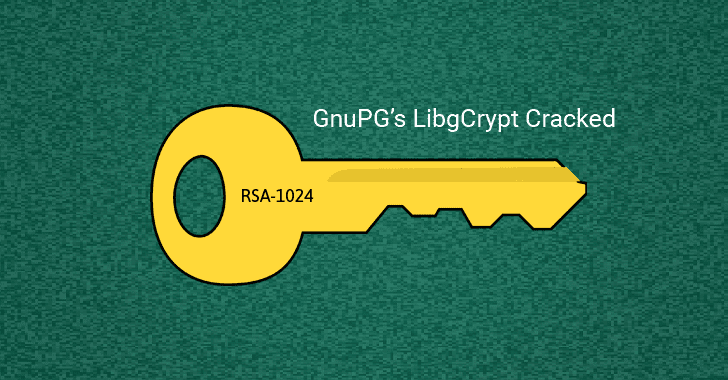 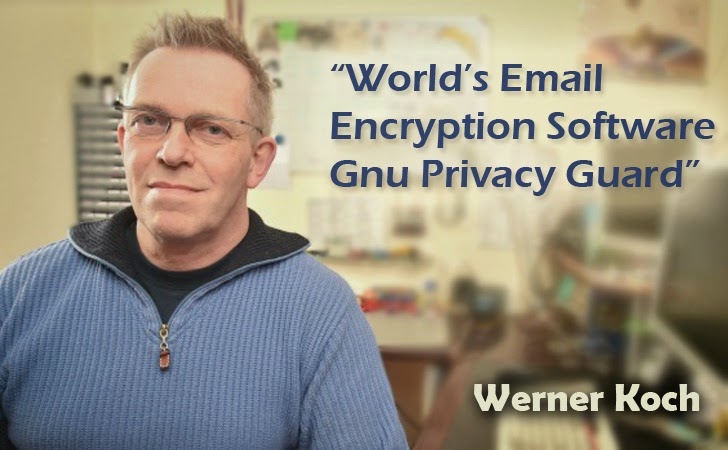 February 06, 2015Mohit Kumar
Werner Koch , the man who authored the free email encryption software , is running out of funding to continue the development of his crucial open-source GNU Privacy Guard (GnuPG) encryption tools.The code works on plenty of operating systems from Linux and FreeBSD to Windows and OS X. The popular Gnu Privacy Guard (GnuPG or GPG) email encryption software is the same used by the former United States National Security Agency (NSA) contractor and whistleblower Edward Snowden to keep his communication secure from law enforcement authorities. GPG uses the OpenPGP standard to safeguard the communications of millions of people, including journalists, dissidents and security-minded people, around the world from eavesdroppers and other miscreants. GPG EMAIL ENCRYPTION RELIES ON THIS GUY ONLY Werner Koch has been maintaining and improving the code of his own secure email software since its initial development in 1997, and since then he has worked at very low wages, but is now
Next Page 
Popular This Week
Microsoft Brings Defender Antivirus for Linux, Coming Soon for Android and iOS
Install Latest Chrome Update to Patch 0-Day Bug Under Active Attacks
Google Bans 600 Android Apps from Play Store for Serving Disruptive Ads
Scam Alert: You've Been Selected for 'Like of the Year 2020' Cash Prizes
Firefox enables DNS-over-HTTPS by default (with Cloudflare) for all U.S. users
New Wi-Fi Encryption Vulnerability Affects Over A Billion Devices
Free Download: The Ultimate Security Pros' Checklist
Exclusive Offers