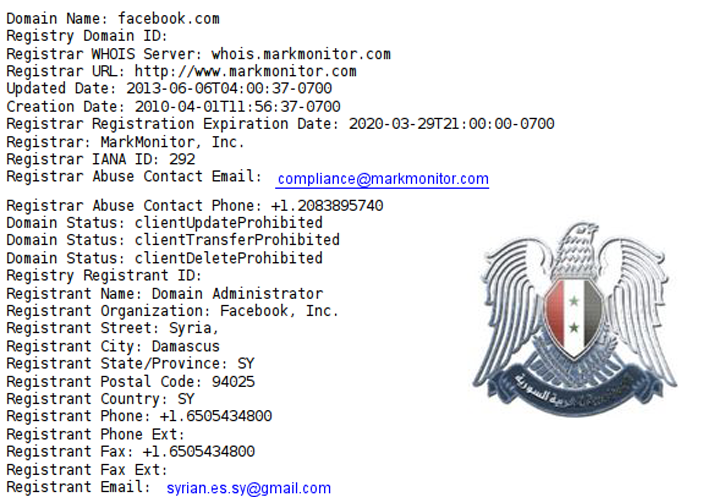 February 05, 2014Mohit Kumar
On the 10th Anniversary of Social networking website Facebook, the hacker group ' Syrian Electronic Army ' claimed that they managed to hack into the administrator account of the Facebook's Domain Registrar - MarkMonitor. The hacking group changed the Facebook Domain's contact information to a Syrian email address on the company's WHOIS domain information page, as shown. " Happy Birthday Mark! https://Facebook.com owned by #SEA " the group tweeted . Hackers also claimed that it had updated the nameserver information to hijack domain, but the process had to be abandoned because it was " taking too much time... " whereas, Facebook spokesperson did confirm that the website's domain record email contact information had been changed. Why SEA Targeted Facebook? Syrian activists and Hackers claimed that Facebook has been deleting pages created by dissidents and removing content as it was violating the social network's standards, acc

February 16, 2013Mohit Kumar
Facebook operator of the largest social network with more than 1 billion members, said on Friday it had been the target of an unidentified hacker group, but that no user information was compromised during the attack. The attack occurred when a handful of the company's employees visited a developer's compromised website, which led to malware being installed on their laptops. ' Last month, Facebook Security discovered that our systems had been targeted in a sophisticated attack ,' read the statement , despite the laptops being ' fully-patched and running up-to-date anti-virus software. ' Reports say Facebook knew about the attacks, which likely exploited a zero-day Java software flaw, well before the announcement. " We are working continuously and closely with our own internal engineering teams, with security teams at other companies, and with law enforcement authorities to learn everything we can about the attack, and how to prevent similar incidents in the
Next Page 