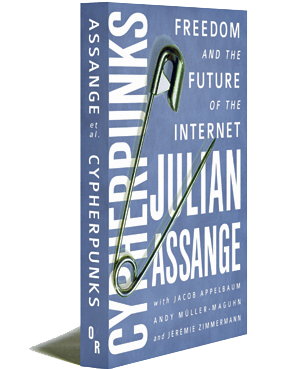 Oct 27, 2012
Julian Assange publish a book based on his interview " Cypherpunks " on " The World Tomorrow ", his controversial talk show, with the people he believes know the solution to the problems of privacy and freedom. The book called ' Cypherpunks: Freedom and the Future of the Internet ,' was written by Assange with three co-authors: Jacob Appelbaum, Jeremie Zimmermann and Andy Muller-Maguhn. Description of this 192 pages book describes, " Cypherpunks are activists who advocate the widespread use of strong cryptography (writing in code) as a route to progressive change. Julian Assange, the editor-in-chief of and visionary behind WikiLeaks, has been a leading voice in the cypherpunk movement since its inception in the 1980s ." Assange said, " In March 2012 I gathered together three of today's leading cypherpunks to discuss the resistance ,  Two of them, besides myself, have been targeted by law enforcement agencies as a result of their work to safeguard priva
Next Page 