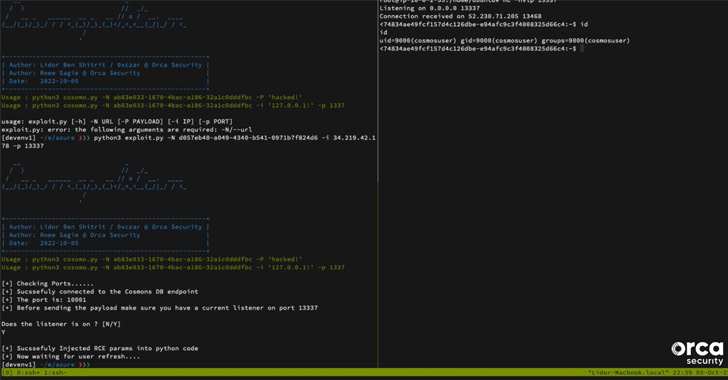 November 01, 2022Ravie Lakshmanan
Microsoft on Tuesday said it addressed an authentication bypass vulnerability in  Jupyter Notebooks  for Azure Cosmos DB that enabled full read and write access. The tech giant said the problem was introduced on August 12, 2022, and rectified worldwide on October 6, 2022, two days after responsible disclosure from Orca Security, which dubbed the flaw  CosMiss . "In short, if an attacker had knowledge of a Notebook's 'forwardingId,' which is the UUID of the Notebook Workspace, they would have had full permissions on the Notebook without having to authenticate, including read and write access, and the ability to modify the file system of the container running the notebook," researchers Lidor Ben Shitrit and Roee Sagi said. This container modification could ultimately pave the way for obtaining remote code execution in the Notebook container by overwriting a Python file associated with the  Cosmos DB Explorer  to spawn a reverse shell. Successful exploitation

August 27, 2021Ravie Lakshmanan
Cloud infrastructure security company Wiz on Thursday revealed details of a now-fixed Azure Cosmos database vulnerability that could have been potentially exploited to grant any Azure user full admin access to other customers' database instances without any authorization. The flaw, which grants read, write, and delete privileges, has been dubbed " ChaosDB ," with Wiz researchers noting that "the vulnerability has a trivial exploit that doesn't require any previous access to the target environment, and impacts thousands of organizations, including numerous Fortune 500 companies." Cosmos DB is Microsoft's proprietary  NoSQL database  that's advertised as "a fully managed service" that "takes database administration off your hands with automatic management, updates and patching." The Wiz Research Team reported the issue to Microsoft on August 12, after which the Windows maker took steps to mitigate the issue within 48 hours of r
Next Page 