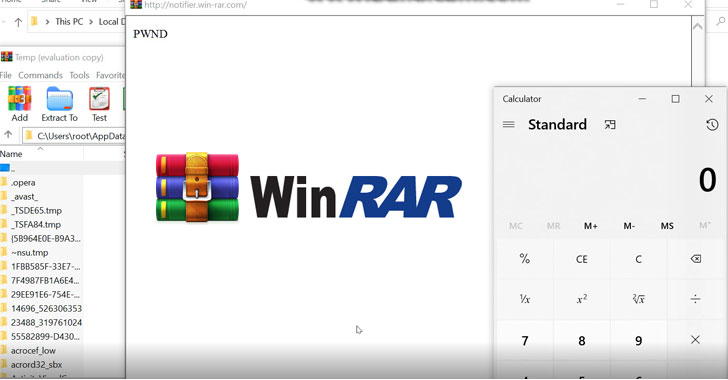 A new security weakness has been disclosed in the WinRAR trialware file archiver utility for Windows that could be abused by a remote attacker to execute arbitrary code on targeted systems, underscoring how vulnerabilities in such software could beсome a gateway for a roster of attacks.

Tracked as CVE-2021-35052, the bug impacts the trial version of the software running version 5.70. "This vulnerability allows an attacker to intercept and modify requests sent to the user of the application," Positive Technologies' Igor Sak-Sakovskiy said in a technical write-up. "This can be used to achieve remote code execution (RCE) on a victim's computer."

Sak-Sakovskiy noted that an investigation into WinRAR began after observing a JavaScript error rendered by MSHTML (aka Trident), a proprietary browser engine for the now-discontinued Internet Explorer and which is used in Office to render web content inside Word, Excel, and PowerPoint documents, leading to the discovery that the error window is displayed once every three times when the application is launched post the expiry of the trial.

By intercepting the response code sent when WinRAR alerts the user about the end of the free trial period via "notifier.rarlab[.]com" and modifying it to a "301 Moved Permanently" redirect message, Positive Technologies found that it could be abused to cache the redirection to an attacker-controlled malicious domain for all subsequent requests.

On top of that, an attacker already having access to the same network domain can stage ARP spoofing attacks to remotely launch applications, retrieve local host information, and even run arbitrary code.

"It's impossible to audit every application that could be installed by a user and so policy is critical to managing the risk associated with external applications and balancing this risk against the business need for a variety of applications. Improper management can have wide reaching consequences."