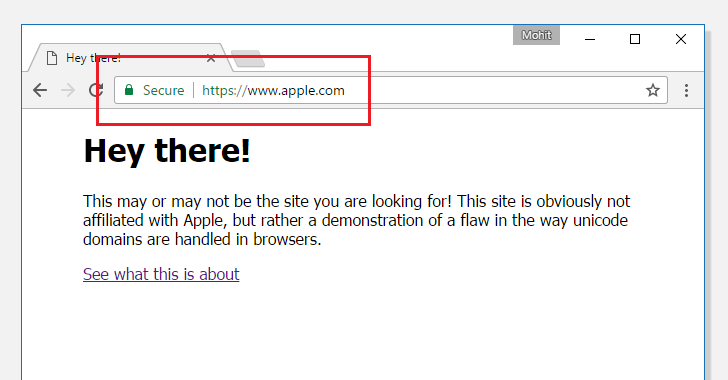 A Chinese infosec researcher has reported about an "almost impossible to detect" phishing attack that can be used to trick even the most careful users on the Internet.

He warned, hackers can use a known vulnerability in the Chrome, Firefox and Opera web browsers to display their fake domain names as the websites of legitimate services, like Apple, Google, or Amazon to steal login or financial credentials and other sensitive information from users.

What is the best defence against phishing attack? Generally, checking the address bar after the page has loaded and if it is being served over a valid HTTPS connection. Right?

Okay, then before going to the in-depth details, first have a look at this demo web page (note: you may experience downtime due to high traffic on demo server), set up by Chinese security researcher Xudong Zheng, who discovered the attack.


"It becomes impossible to identify the site as fraudulent without carefully inspecting the site's URL or SSL certificate." Xudong Zheng said in a blog post.

If your web browser is displaying "apple.com" in the address bar secured with SSL, but the content on the page is coming from another server (as shown in the above picture), then your browser is vulnerable to the homograph attack.

There is another proof-of-concept website created by security experts from Wordfence to demonstrate this browsers' vulnerability. It spoof "epic.com" domain.

Homograph attack has been known since 2001, but browser vendors have struggled to fix the problem. It's a kind of spoofing attack where a website address looks legitimate but is not because a character or characters have been replaced deceptively with Unicode characters.


Doesn't matter how much aware you're, anyone can fall victim to this "Almost Impossible to Detect" Phishing Attack.

Many Unicode characters, which represents alphabets like Greek, Cyrillic, and Armenian in internationalised domain names, look the same as Latin letters to the casual eye but are treated differently by computers with the completely different web address. 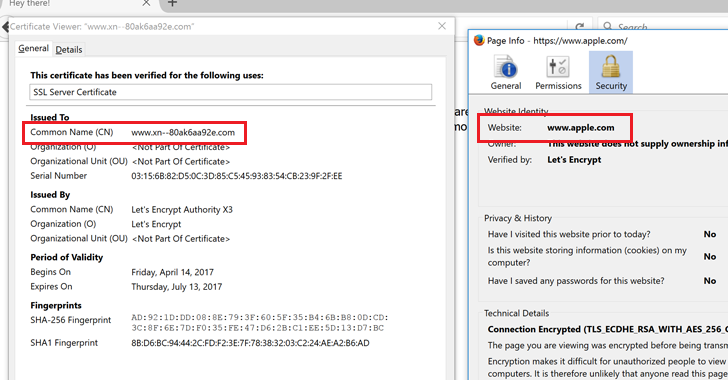 For example, the Chinese domain "短.co" is represented in Punycode as "xn--s7y.co".

According to Zheng, the loophole relies on the fact that if someone chooses all characters for a domain name from a single foreign language character set, resembling exactly same as the targeted domain, then browsers will render it in the same language, instead of Punycode format.

This loophole allowed the researcher to register a domain name xn--80ak6aa92e.com and bypass protection, which appears as "apple.com" by all vulnerable web browsers, including Chrome, Firefox, and Opera, though Internet Explorer, Microsoft Edge, Apple Safari, Brave, and Vivaldi are not vulnerable.

Here, xn-- prefix is known as an 'ASCII compatible encoding' prefix, which indicates web browser that the domain uses 'punycode' encoding to represent Unicode characters, and Because Zheng uses the Cyrillic "а" (U+0430) rather than the ASCII "a" (U+0041), the defence approach implemented by web browser fails.

Zheng has reported this issue to the affected browser vendors, including Google and Mozilla in January.
While Mozilla is currently still discussing a fix, Google has already patched the vulnerability in its experimental Chrome Canary 59 and will come up with a permanent fix with the release of Chrome Stable 58, set to be launched later this month.

Meanwhile, millions of Internet users who are at risk of this sophisticated hard-to-detect phishing attack are recommended to disable Punycode support in their web browsers in order to temporarily mitigate this attack and identify such phishing domains.

How to Prevent Against Homograph Phishing Attacks

Firefox users can follow below-mentioned steps to manually apply temporarily mitigation:
Unfortunately, there is no similar setting available in Chrome or Opera to disable Punycode URL conversions manually, so Chrome users have to wait for next few weeks to get patched Stable 58 release.

Although, there are some third-party Chrome extensions/add-ons available on App Store that users can install to get alerts every time they came across any website with Unicode characters in the domain.

Meanwhile, one of the best ways to protect yourself from homograph attacks is to use a good password manager that comes with browser extensions, which automatically enter in your login credentials for the actual domains to which they are linked.

So, whenever you came across any domain which looks like legitimate "apple.com" or "amazon.com" but actually is not, your password manager software will detect it and will not automatically authenticate you to that phishing site.

Moreover, Internet users are always advised to manually type website URLs in the address bar for important sites like Gmail, Facebook, Twitter, Yahoo or banking websites, instead of clicking any link mentioned on some website or email, to prevent against such attacks.

Update: Opera has also released a security patch to prevent possible phishing attacks with Unicode domains with the release of its stable build, Opera Stable 44.0.2510.1449. Browser installation links for Windows, macOS, and Linux are available on the company's official site.