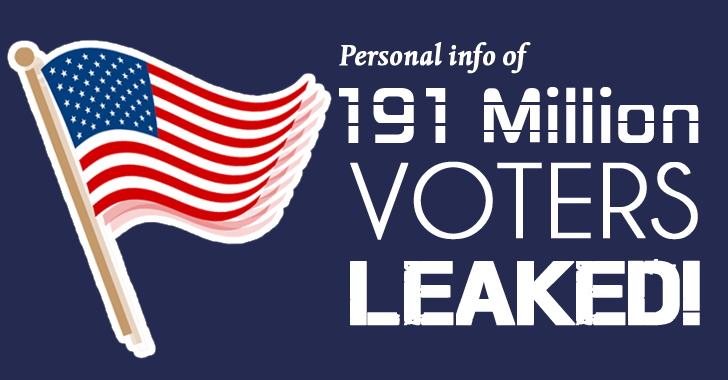 BREAKING: A misconfigured database has resulted in the exposure of around 191 Million voter records including voters' full names, their home addresses, unique voter IDs, date of births and phone numbers.

The database was discovered on December 20th by Chris Vickery, a white hat hacker, who was able to access over 191 Million Americans' personal identifying information (PII) that are just sitting in the public to be found by anyone looking for it.

However, the recent discovery made him shocked when he saw his own information in the database, according to DataBreaches.net, whom the researcher contacted and provided all the details about his finding.

Vickery has his hands on all 300GB of database contains a long list of voter records including:
Not just his own, but Vickery also looked up a number of police officers in his city and confirmed the information was all correct. Reporters from CSO and DataBreaches.net also did the same and upheld the accuracy as well.

Fortunately, the database doesn't contain Social Security Numbers, driver license numbers, or any financial data, but it's still a massive amount of data when it comes to protecting users privacy and security.

The crazy part of the data breach is no one is taking responsibility for the exposed database.

Vickery, CSO and DataBreaches.net contacted various political tech groups and known voter information companies, but all denied the database belonged to them.

The FBI and Internet Crime Complaint Center were all approached by Vickery and DataBreaches.net; so let's now see how long this information remains alive and accessible for anyone to see.