Gary McKinnon faced extradition for hacking into Pentagon and Nasa systems, and but they believe that he could encourage other hackers to become government cyber warriors. 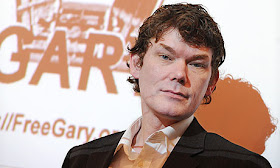 'If the notion of trying to attract master hackers to our cause is ever to take hold, this might be just the right case in which President Obama should consider using his power to pardon,' says Arquilla.

China is widely thought to employ hackers, so the Pentagon aims to expand its cyber security personnel from 900 to 4,900 in the next few years and Hackers are frequently employed by security firms after serving sentences and Arquilla suggest Obama to do so.

'Today's masters of cyberspace are not unlike the German rocket scientists who, after World War II, were so eagerly sought by both sides in the Cold War to help them build missiles for war and rockets for space exploration.'

Pardoning Gary McKinnon may open many opportunities for hackers.