Nov 17, 2010Mohit Kumar
HashGenerator is the universal hash generator tool which automates the generation of 14 different type of hashes or checksums. It support most of the popular hashes including MD5 family, SHA family, BASE64, CRC32, ROT13, RIPEMD, ALDER32, HAVAL, WHIRLPOOL etc. It can even generate hash for the file as well as text input also. User can directly enter or paste any text from clipboard and generate hash. It also supports 'Drag & Drop interface' which allows you to quickly drag files onto the tool for hash generation.
Hashes or checksums are mainly used for file integrity verification. Often files downloaded from Internet are checked with MD5/SHA256 hash to make sure file is not tempered. Hashes are also used in encryption and storage of password as well as other sensitive data to protect it from the spying eyes. HashGenerator helps in quickly computing or verifying the hash for any such file or password text. 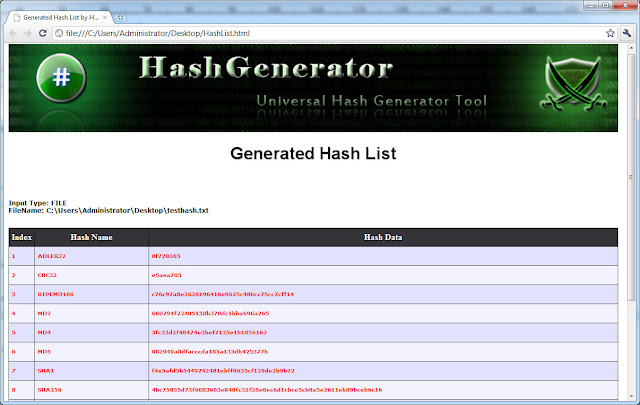 HashGenerator is fully portable tool which can be directly run anywhere without installing locally. It also comes with Installer for those who wants to install it locally and use it on regular basis.
Features of HashGenerator


- Generate hashes for 14 popular algorithms including MD5, SHA256, BASE64.
- Create Hash from the input file or any text
-'Drag & Drop' feature to quickly drag files onto the tool.
- Right click option to selectively copy the hash from the displayed list.
- Save the generated hash list to HTML or TEXT file
- Simple, Easy to Use GUI Interface.
- Completely Portable Tool which also comes with Installer for local Installation & Uninstallation.
Operating system supported
from Windows XP to latest operating system Windows7
Downlaod HashGenerator here